4 Biggest Mistakes I Made With Digital Business

So… you want to start an online business but you’re worried about making mistakes?

Fortunately for you, I’ve made quite a few mistakes in my earlier days between wasting money on my website, needlessly buying inventory, or just listening to the wrong people.

The purpose of this article is to help you avoid making the same mistakes I made early on.

You’ll definitely still mess up here and there, but you’ll be a bit better off learning from what I did wrong.

Let’s get into it!

What's In This Guide?
Mistake 1: I Trusted The Wrong People
Mistake 2: I Started In E-Commerce First
Mistake 3: I Tried To Create Something New
Mistake 4: I Spent Money On The Wrong Things
Final Thoughts…

Mistake 1: I Trusted The Wrong People

Perhaps my greatest mistake was putting trust in people who didn’t have my best interest.

For example, when I first started, I entrusted a marketing agency to steer me in the right direction.

I figured I was paying them good money, they’d help me out right?

This was a TERRIBLE IDEA.

They were EXTREMELY busy with there 100’s of other clients.

I was a nobody, a waste of time basically.

I was just beginning with internet marketing at the time, and I had a million questions.

How should I market myself…

All these questions unanswered simply because it wasn’t their job to care.

And I don’t blame them.

It was their job to build a website to specifications and be done.

It was me who picked them.

This single mistake set me back $7,800 bucks and lots of frustration.

To give you an idea, here’s an invoice I needed to pay to get it done. 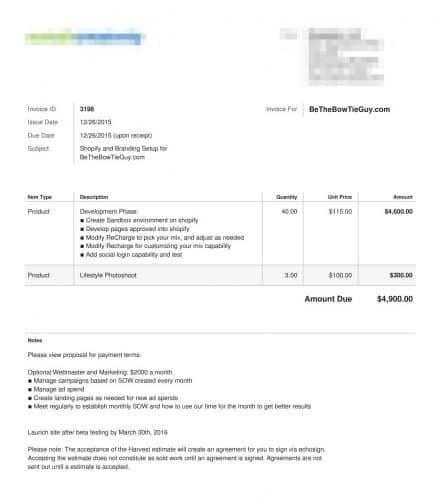 Oh and by the way, I no longer use that website… so… yeah.

I will say that there was a silver lining to that job.

I learned the process they took to go from idea to website.

Specifically, one of the biggest things I learned was about website photography (banner images, product images, etc) and how marketing agencies take pictures of stuff and how that translates to the web.

I recently needed to update a banner image for my bow tie website.

Obviously, I wasn’t going to pay anyone to do it, because I learned how to do it myself.

Here’s what I came up with… 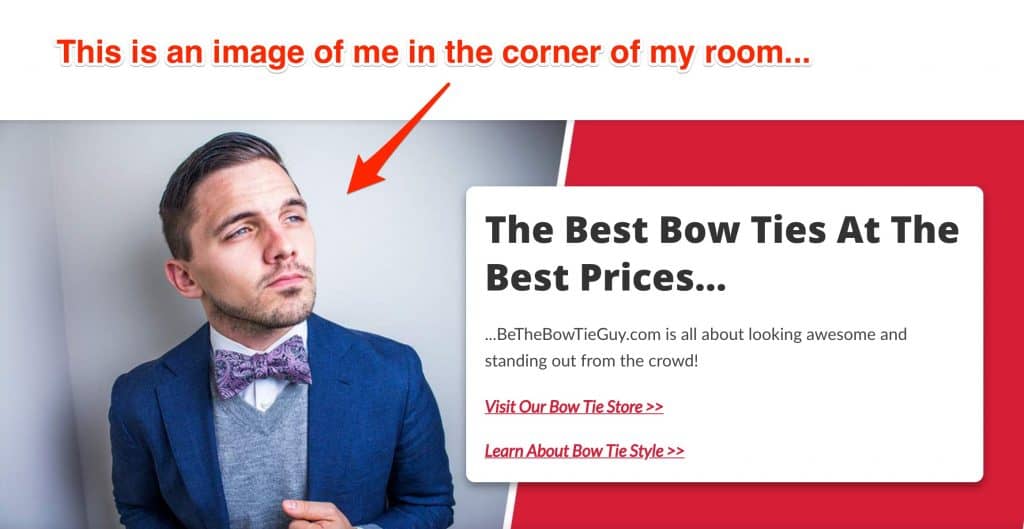 I took this in the corner of my room with a softbox and $400 DSLR camera.

I then transferred it to one of my favorite graphic design tools called Canva and added the red on the right with the white border.

The floating box you see on the right is from the website and isn’t in the picture.

But you get the point.

Even though I spent a bunch of money on a website I no longer use, I still gained experience about “the process” and how marketing agencies do things, which IS VALUABLE.

Mistake 2: I Started In E-Commerce First

This was another big mistake I made early on.

At the time, I thought I needed to sell something tangible like bow ties to make any money online.

Well, they were trending at the time, it felt like a good idea, and I just wanted to get started.

Except I was working full-time and didn’t think about the 1,000 other things that come along with an e-commerce based business.

How about customer service?

Answering phone calls at all hours of the night or during work hours. From returns, to sizing, to questions about how to coordinate a blue bow tie with a prom dress.

Supplier relations is another one.

I had to source reliable vendors, go back and forth with samples, and make sure the products they manufactured were to the exact specifications I sent them. This was extremely frustrating and stressful. A couple of the patterns I did send them came back with errors, but I had to just deal with it.

Distribution is also up there…

What happens when someone places an order? You need to get a stamp/label, package it, and ship it. Once you have a system down it’s pretty easy, but the time it takes adds up.

Now you may be thinking… “But Shane, what about dropshipping? That’s easier right?”

For those who don’t know, dropshipping is a way to setup a website and list products without actually holding any inventory.

Wayfair.com is a really good example of this. Pretty much everything on their website is held at the location of the vendor. 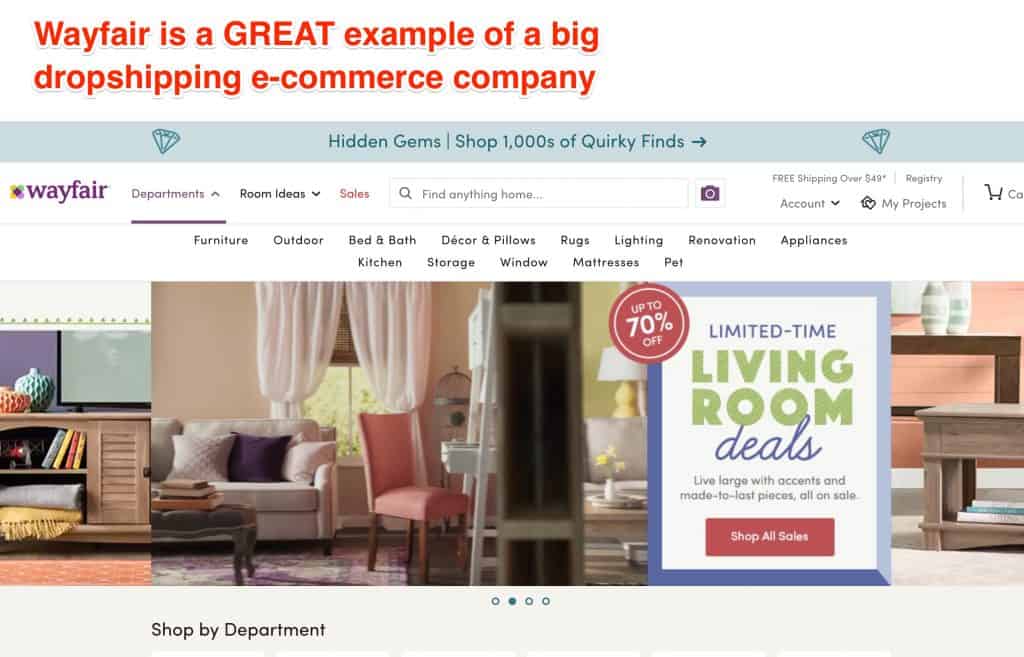 It’s great in theory, but TERRIBLE if you’re working full-time.

I have friends who are doing it successfully, but only after they’ve developed a team of 5 people all working on it at the same time.

It just takes too much time to deal with all the operations that come along with that type of business model. It’s hard to outsource key roles, which make it very time-consuming.

The point I’m trying to make is that I mistakenly started in e-commerce.

Instead, I should have stuck to a site more centered around SEO and affiliate sales is a MUCH better and more passive way to make money online.

When you get more experienced, you can venture into other areas of online marketing like e-commerce and dropshipping, but for now stay away.

Mistake 3: I Tried To Create Something New

The last mistake I’ll mention is that I tried to create something new.

The fact that I was selling bow ties wasn’t new, because other companies were doing that already (tiebar.com, ties.com, etc).

It was that I was ONLY selling bow ties. Specifically, self-tie bow ties, which means that you needed to be able to tie it up (aka not the pre-tied variety).

I wanted to build the brand around the idea of standing out and empowering people to be individualistic.

In theory, it was a cool idea.

But in practice, not so much.

There weren’t any other brands doing what I was doing so it was hard to find a successful model to copy.

On top of that, I lacked the resources and experience needed to reach my target market (which wasn’t very big already).

I didn’t have the cash to burn to pay for Facebook ads or the time to dedicate to more grassroots campaigns networking with people who could amplify the brand.

And even if I did that, I didn’t have strong enough backend offers, which makes the lifetime value of my customer very low.

To give you an idea, my bow ties were $20/tie with a profit margin of around $15, which is good, but again, not good enough to make for a viable business.

So I repeat… I tried to do something new and untested.

This was a bad idea.

At the time I was a complete beginner with no concept of marketing, funnels, or customer value.

I just wanted to get started.

Avoid this mistake by going with proven business models and copying what works, then expanding when you have to the resources to do so.

Mistake 4: I Spent Money On The Wrong Things

If you want to be successful in business (including online marketing), you’re going to need to spend money, that’s a fact.

Unless you’re Apple, you have limited cash resources and you need to make sure you allocate them correctly or else your business won’t last long.

When I first started I spent $7,800 on a website and some branding that I didn’t really need and then an additional $20,000 on inventory.

This was a mistake that set me back quite a bit.

You see the thing was… I didn’t know any better.

Which was actually part of the problem.

Instead, what I SHOULD have done is dedicated resources to coaching programs of people who have previously found success and did everything I could do to replicate that.

Today things are much different…

SEO optimized content to fill up my websites and drive more traffic, which increases revenue.

As you gain experience you’ll begin to see the bigger picture and how best to allocate resources that move the needle.

Mistakes I made when I was first beginning my online marketing journey.

I’m still selling the bow ties for Bethebowtieguy.com, but it only makes me about $1,000/month, which isn’t bad, but far too much work for the return on investment.

Hopefully, you’ve learned a thing or two from my mistakes. 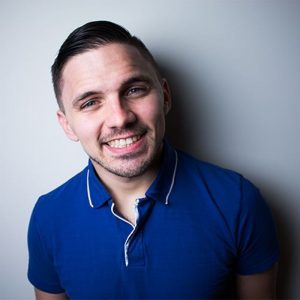 Hey I'm Shane! Former accountant, now digital business owner/operator and lead instructor here at Digital Business Prep. I've built and sold 2 online businesses and I am currently working on 3 more. I'm here to teach you how to properly build, grow, and scale your own online based businesses and avoid common pitfalls new people tend to make!

Join our free training and learn our 3-step system our experts are using right now to build, grow, and sell their digital businesses.

Start Your Training (It's Free!) 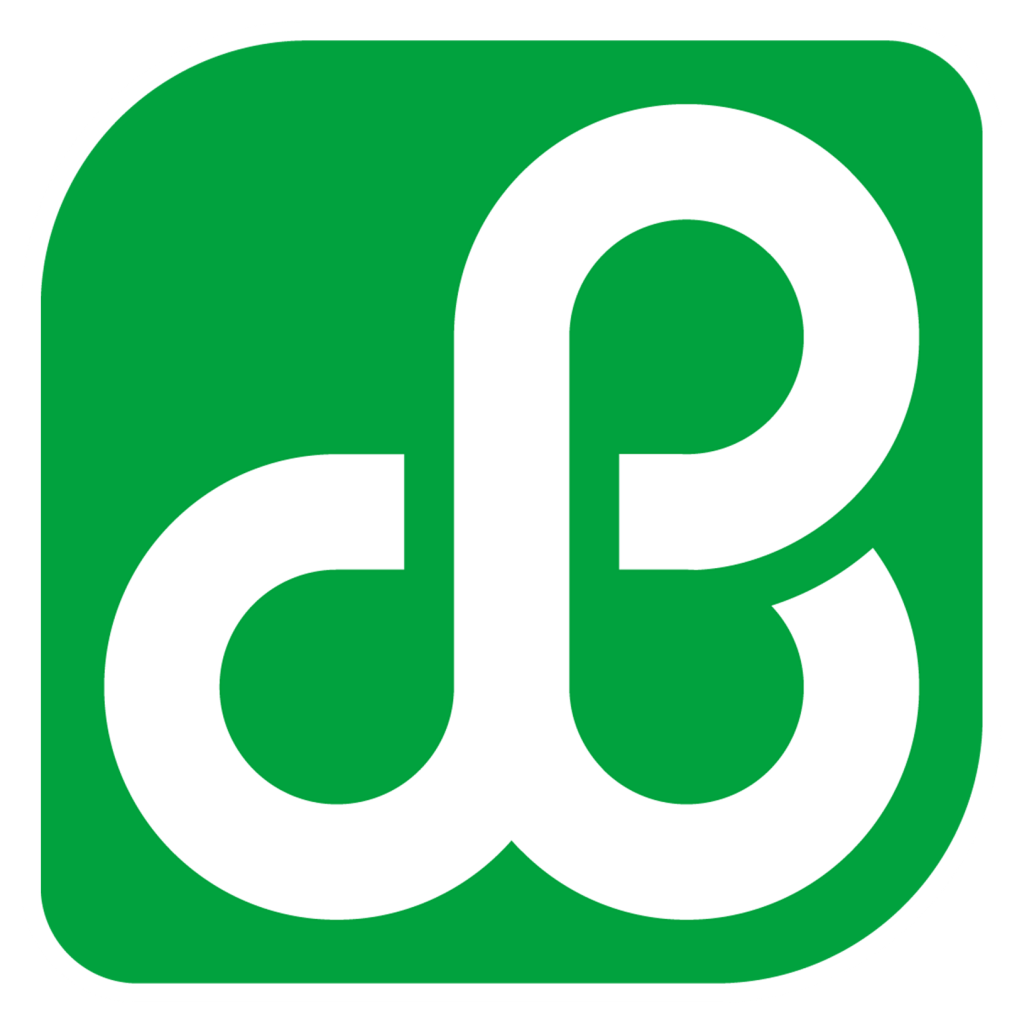